The Benin City-born star midfielder Mikel Agu has revealed has acquired Portuguese citizenship after a decade of residency in the Western European nations.

The 27-year-old Super Eagles midfielder first signed for Porto youth team in 2011 made his debut against Gil Vicente in a 2-1 win coming as a substitute for Josue as he became the first Nigerian to play for the Primeira Liga club.

Agu has been sent to several loans to top European clubs before joining Vitória de Guimarães in 2019 the summer where he featured 30 times one goal in the process.

Super Eagles midfielder took to his social media handle to share the news because according to Portuguese law, an individual is eligible for citizenship through naturalisation after six years of residence.

“What God cannot do does not exist, now a Portuguese,” he posted on social media, while holding his Portuguese passport. 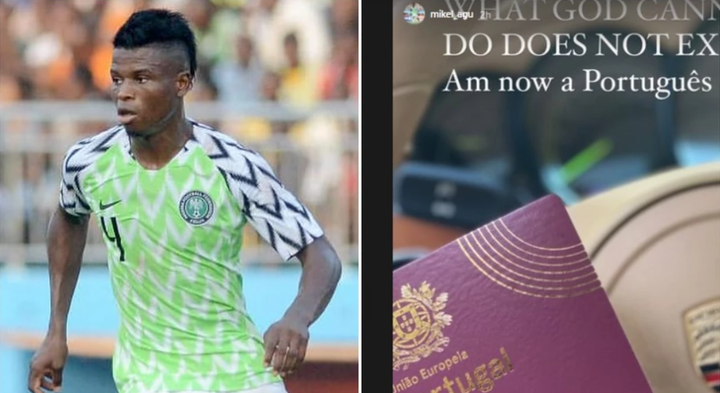 Agu was named in Nigeria’s preliminary 30 man squad for the 2018 FIFA World Cup in Russia as he did not make the final 23 but the midfielder has seven appearances for the Super Eagles.

Ikponmwosa Umweni - March 16, 2021 0
Two Super Eagles target of Ebere Eze and Noni Madueke has been included in England squad for the 2021 U21 UEFA European U21 Championship...

Chelsea star favours a move to Arsenal after Barcelona pull out...

Ex-Enyimba ace tells Rohr he can become Eagles No 1 if?