Liverpool legend, Steven Gerrard says Super Eagles midfielder Joe Aribo is “a game changer” and Rangers missed him in the goalless draw against Livingston during the Scottish premiership match played at the weekend and hopes he returns for the Kilmarnock game at Ibrox next Saturday.

The Gers manager had enjoyed a 100% record since the start of the 2020/21 football season with the Nigerian as a major part of that success but an ankle injury ensured that he missed the fourth game of the season and his absence was deeply felt.

Rangers failed to breakdown their opponents as they dropped their first points of the season and Gerrard felt it could’ve been different with Aribo in the match-day squad.

Gerrard told reporters: “I’m hoping to have him back for next weekend. He’s got a small ankle problem that we scanned. There’s a bit of swelling in there which is obviously a big risk coming to a surface like this. 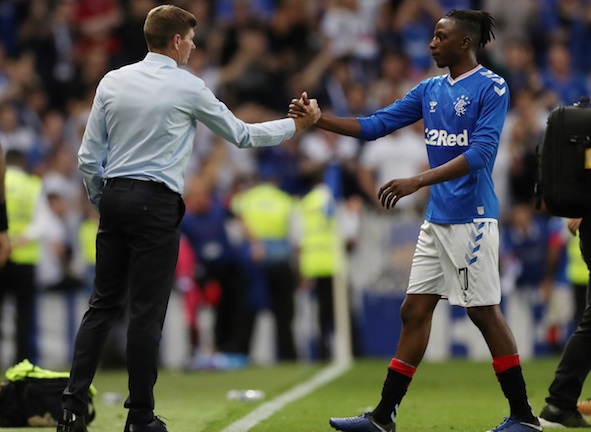 “We made the sensible call but I think we certainly missed Joe today as he’s obviously a game changer in the final third. We threw everything we had at it. It was only really Greg Stewart – from an attacking point of view – that we never threw on.

“We started with a front four. Good players normally, who a lot of the time win games for us and we added a lot of good players to it. So you know, it’s a frustrating one but it’s important to stay calm and move on.”

Aribo scored his first goal this season during the 3-0 victory over St. Johnstone on Wednesday, 12 August.

Roger Milla intervenes in the Maradona versus Messi debate

Bruno, Pogba play together for the first time in Man United...