Mbappe prepares for a move away from Paris Saint-Germain

Former Ballon d’Or winner Ronaldo Nazario De Lima has named his perfect dream eleven with a collection of super players as Juventus forward Cristiano Ronaldo misses out on the list.

The 48-year-old Brazilian legend has graced Dutch Eredivisie, La Liga, Serie A, and the international stage where he played with and against some of the very best footballers during his 18-year career.

Ronaldo have a glittery career where he scored 352 goals, as well as bagging 62 in 98 for the Brazil national team after playing Cruzeiro, PSV, Barcelona, Inter Milan, Real Madrid, AC Milan, Corinthians, and fourth-time world champions.

Three-time FIFA World Player of the Year picked his best dream eleven both past players and present stars according to FootyRoom official Twitter handle.

However, legendary Gianluigi Buffon is in between post protected by a star-studded backline comprising of Brazilian full-backs Cafu and Roberto Carlos, and Italian center-backs Paolo Maldini and Fabio Cannavaro.

His midfield has Zinedine Zidane and Andrea Pirlo easily calling the shots, notwithstanding the glorious abilities of Diego Maradona and Lionel Messi – two supernatural Argentines of various ages.

Up top, he chose to pick himself nearby Pele and Ronaldo – finishing conceivably the best assortment of 11 players into a beginning XI. World-class ability everywhere throughout the pitch. 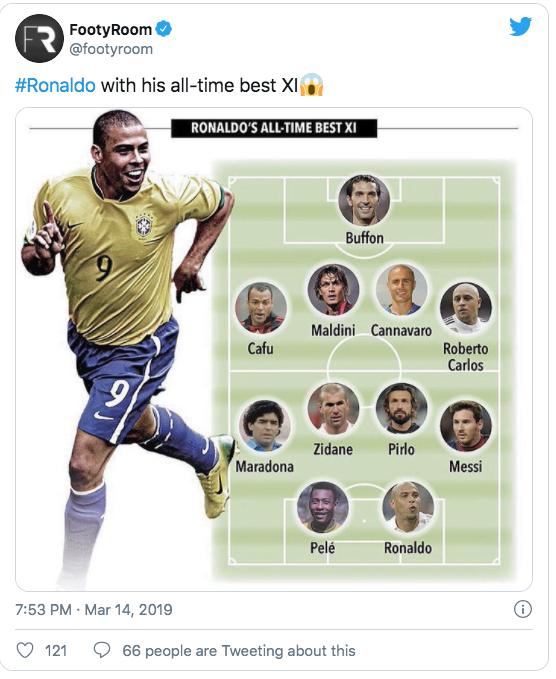