Nigeria international Victor Osimhen has arrived in Italy for Napoli transfer talk Napoli ahead of move to San Paolo Stadium.

The 21-year-old Nigeria international has been linked to a number of European clubs including Napoli, Chelsea, Liverpool, Arsenal, Tottenham, Barcelona, Real Madrid and AC Milan following his imperious performances for Ligue 1 outfit Lille in the 2019-20 campaign after scoring 18 goals and recorded six assists in 38 appearances for Christophe Galtier’s men.

According to Sky Sports journalist, Gianluca Di Marzio claim via his Twitter handle that Super Eagles striker Osimhen landed in Naples with his girlfriend and representatives where they will meet Napoli officials later to seemingly negotiate personal terms, but Osita Okolo made it clear non-footballing factors would be considered too. 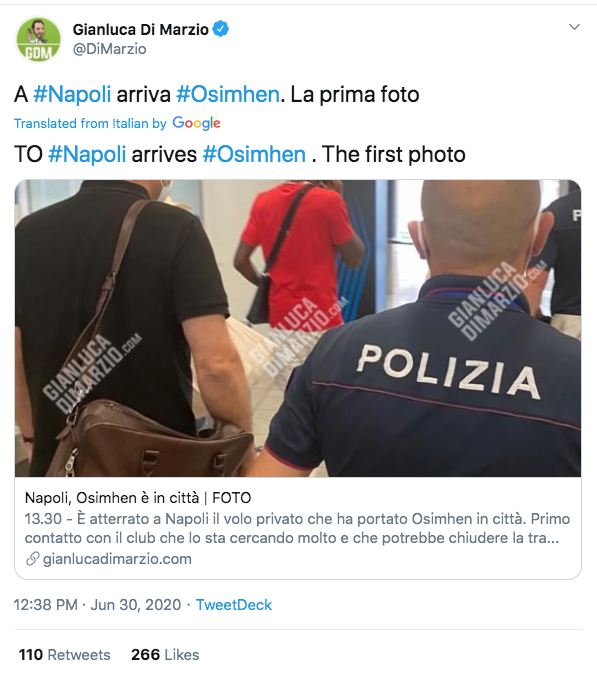 “Napoli’s interest is great, De Laurentiis and the directors really like him,” Okolo told Tuttomercatoweb.

“There have already been several rounds of talks, but it’s not true that there’s an agreement. To date, no agreement has been reached with Napoli.

“We’ll see what happens with Lille, who still own Osimhen. Victor likes Naples, which is a fantastic city, and he obviously also likes Napoli as a team.

“The interest of a big Italian team doesn’t surprise me, given how well he did with Lille.

“If we talk about Serie A, however, many other factors must be considered, such as the issue of racism.

“For, it’s a big problem in Italy and unfortunately it’s widespread. In any case, the final word rests with Victor and no-one else.”

Should he join the Parthenopeans, the striker would link up with Senegal international Kalidou Koulibaly and Algeria’s Faouzi Ghoulam at Stadio San Paolo.