The 22-year-old Nigerian forward completed his move to Red and Blues to end transfer speculation surrounding him after 12 million Euros after finished as Heerenveen top scorer last season with 10 goals and provided four assists in 29 appearances across all competitions for the Frisians.

Ejuke now joins the likes of Ahmed Musa, Chidi Odiah and Aaron Samuel among the Nigerian players who have featured for the Russian Premier League club CSKA Moscow took to his official social media to celebrate his transfer move to VEB Arena. 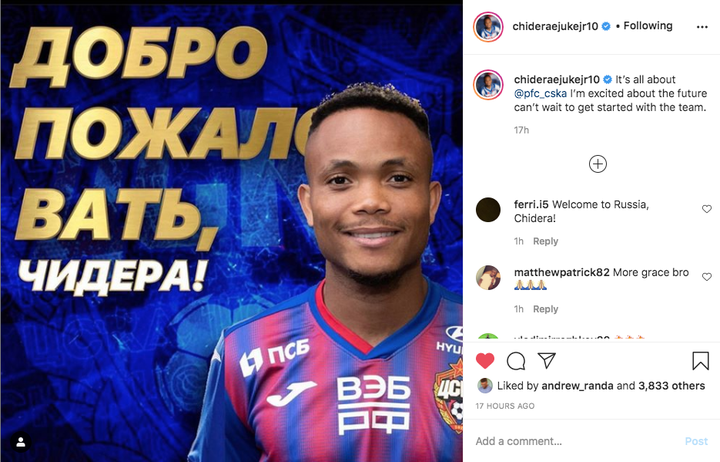 CSKA Moscow finished fourth in the Russian Premier League last season and have recruited the winger in an effort to strengthen the squad for the 2020-21 campaign.

Ejuke started his career from his country, Nigeria with Supreme Court FC youth teams before joining Gombe United in 2016 and he will hope to impress with CSKA for a chance to get a call-up to the Super Eagles.

The Nigerian star has been assigned jersey No 11 by his new club could make his debut for his new club when they take on Spartak Moscow in a Premier League game on September 12.

UEFA reveals when the Champions League and Europa League will be...

Iseghohi Odianosen - April 5, 2020 0
UEFA president Aleksander Ceferin has revealed when the Champions League and the Europa Lague will be completed. Ceferin believes that no matter what happens the...